I felt uncharacteristically down the other day and thought to revisit The Storyteller, the late Yasmin Ahmad's blog.

Come this July 25th, it will be two years since her untimely death from a stroke at the age of 51.

She first came to the Malaysian public's attention as a result of the TV commercials she did for Petronas, celebrating Chinese New Year, Hari Raya Adilfitri and Deepavali and also those for National Day celebrations.

The commercials she did for Petronas never failed to tug at and warm the hearts of Malaysian viewers. For her TV commercials to be able to do this consistently spoke much of her. Each year  Malaysians of all races would look forward to her Petronas commercials.


A Petronas Hari Raya Commecial In Malay with English subtitles

She also did several commercials for Singapore's Ministry of Community Development, Youth and Sports, including the poignant, touching and yet funny "Funeral"

Yasmin Ahmad was born on the 7th of January 1958 in  Muar,  Johore where I once worked. She graduated with a B.A in Psychology from the Newcastle University, England.

She worked briefly as a trainee banker in 1982, then moved to work as a marketing representative with IBM while she moonlighted as a singer and pianist at night. In 1993, she started work as a copywriter with Ogilvy and Mather and left in 1998 to work as joint creative director with Leo Burnett where her career took off in a big way.

Yasmin Ahmad had much success in the advertising industry, but it was her full feature films that brought her work to another level.

Her first feature lenght film Rabun (failing eyes) completed in 2002, was about a loving elderly couple who moved from the city to live in the kampung. The film is said to be based on Yasmin Ahmad's own parents. Rabun drew much flak from conservative Malays and Muslims and suffered several cuts in the hands of the censors before being allowed to be screened. I have not seen Rabun, so I can't say much about it.

However, it was Sepet (slit eyes) that brought Yasmin Ahmad to the attention of a wider spectrum of audience. Sepet is one of a trilogy about the life of Orked.

Sepet is actually a simple but honest film on interracial love between a 16 year old Malay girl (Orked) waiting  for her SPM school results and an older Chinese boy (Jason) who sells pirated VCDs with a penchant for poems and who spouts Rabindranath Tagore, the Indian poet.

Yasmin Ahmad broke all stereotypes by not making the Malay girl convert her Chinese boy friend much to the chagrin of the censors here who refused to release the film without  cuts. The dialogues, for a much refreshing change, are not the usual suspects, cliched and stilted.

For the first time, in Malaysian movie history, viewers could actually identify with the dialogues as how Malaysians talk to each other in real life. The ending too, was not the usual predictable bore. In fact, the ending itself caused no little stir or discussion among movie goers.

And for a long time since the P. Ramlee movies, many have watched the film not once but many times
over.

Yasmin Ahmad was on to something, if she was able to make such a diverse Malaysian audience enjoy the film.

A large part was due to the honesty, the taboo-busting dialoges and simply the warmth and love of the human spirit the film conveys.

Despite being criticised, Sepet swept several local film awards, including for Most Original Story and Best Film in 2005.

The second of the Orked trilogy Gubra (anxiety) was released in 2006. It too, drew some controversy. Gubra is actually two stories in one. The story of a  loving bilal and his wife and their relationship with a prostitute cleverly juxtaposed with the story of Orked who has married a two-timing husband (not Jason). That scene of the bilal comforting a dog while on his way to sound the morning azan, drew the ire of conservative Muslims.

Mukhsin is the last of the Orked trilogy released in 2007 and tells the story of a young Orked and her first love.
﻿﻿

I will just leave readers with some foreign reviews of the film Yasmin Ahmad left in her The Storyteller blog.

Yasmin Ahmad released two more films before she passed way, Talentime and Muallaf (The Convert). Muallaf was in fact produced earlier but released for screening only after Talentine because of the controversy over the scene in which Syarifah Armani ( the character for Rohani) was shaved bald for the film, something conservative Muslims and the censors considered going against Muslim tenets. But it enjoyed huge success when first screened in Singapore.

Everyone of Yasmin Ahmad's feature films has won international awards of one kind or another, including Mukhsin which had won the grand prix award under the Generation Section and the Crystal Bear Special Mention under the Generation K-Plus at the Berlin Film Festival 2007.

Post Script : Before she passed  away, Yasmin Ahmad was to direct two other films, one a joint   Malaysia-Japan effort Wasurenagusa (Touch-Me-Not) about a young Malay girl searching for her Japanese mother in Japan and Go, Thaddeus about the late Singaporean triathlete Thaddeus Chong.

Her films have also been screened in retrospectives in several countries including Japan, Taiwan, Australia and France. 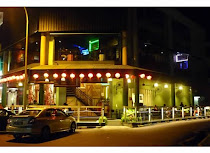 I attended my neighbour's daughter's Indian wedding dinner at the Sentul HGH Convention Centre. Click for a peek

Yasmin Ahmad was arguably Malaysia's best story-teller, filmmaker and advertiser. She was well known for her Petronas commercials and had won numerous international awards including the Golden Lion award for the 'Tan Ming Hong In Love' commercial. Her feature film Sepet not only garnered her several international awards including for Best Asian Film but also drew multi-racial audiences that rarely happens for a local film.

Genting Highlands Is A Popular Retreat With A Casino 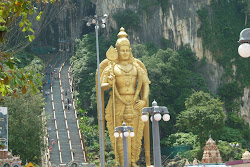 Malaysia's Famous Landmark. Note The Statue Of Lord Muruga And The 272 Steps To The Temple Cave In The Background 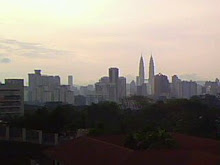 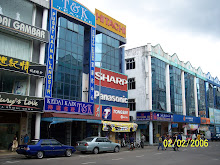 Kluang was a sleepy hollow, but is fast becoming a bustling town. You can't miss the bust-shaped gunung Lambak lording over the place and the town is well known for its tv brand coffee powder

The Kluang railway station coffee shop, now re-branded Kluang RailCoffee, is well known for its cuppa of coffee and the charcaol grilled piping hot buns oozing with butter and kaya...It used to attract standing-room only crowds. It still does, but the last time I was there it wasn't a good experience for me. The famous coffee had somewhat lost its oomph and even the buns...The shop has a long and noted history being first opened for business in 1938 and the place is now run by the 3rd generation LIm family. I hope the next time I return, the coffee would regain its oomph. Click to read more...

Namaste! Welcome To My Blog! Have A Nice Day And See You Here Again! 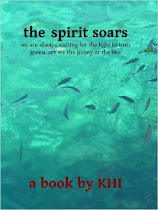 My e-book in Amazon. But be warned. It may not be your cup of tea. We are always waiting for the lights to turn green. Are we the honey or the bee. Still, I'd like to think that it is the Golden Pu'er. A potent brew in five minutes 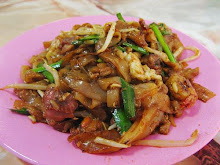 Any one of the three iconic hawker food of Malaysia can get you salivating. Click for a taste

During the Muslim fasting month of Ramadan, all kinds of food and savouries are sold at the Ramadan bazaar or pasar Ramadan to break fast. These Ramadan bazaars are popular with all the races here in Malaysia.

ordinary malaysian
I do not know who I am, so I can't say much about myself. I am still searching. If you have found me please let me know.